(4 of 5 in the Pragmatic Path to Agnosticism)

The Soul of the Atheist

Over lunch recently a friend (a staunch atheist) and I argued over spirituality. I maintained that a pragmatic agnosticism was the only rational response to a growing body of evidence. My friend argued vehemently that atheism was the only stand a principled rational thinker could take. Towards the end of the lunch I asked him, a la Pascal’s famous bet, what did he have to lose in being open to the possibility of the existence of God(s) and the reality of Spirituality(1)?

He smiled, sat back in his chair, and laughed. “I’ll lose my soul,” he said.

My friend’s joke aside, there are many who label themselves rationalists who are vehement and unquestioning adherents to atheism. It’s a natural human reaction, especially to a resurgent fundamentalist religion trend, and for years I was one of them. But it’s wrong.

The Rise of Fundamentalism

Over the last 40 years the various religions have, worldwide, staged a rebirth by returning to the literal scriptures and the teachings of centuries-old leaders. Be it born-again Christians, fundamentalists Shiites, or Ultra-Orthodox Jews, religion has triumphantly re-risen from the ashes of its own corpse after being famously sentenced to death by the secular movements of the Twentieth Century. Fundamentalist sects are by far the fastest growing of any sects in each of the world’s religions. Their progress has been scary. From ongoing battles to roll-back the (good) science of Evolution, to silencing of unpopular opinion, to elongating the suffering of human beings to make political points, to the September 11th hijackers belief in eternal salvation for murdering >2,000 innocents, the march of the Fundamentalist has been unrelenting.

And now secularism and rationality finds itself on the defensive, arguing against an opponent who visibly does not play by the rules of rational discourse and the Scientific Method. How can you defeat an opponent who disregards all evidence if it contradicts with their Faith? Faith (to me) is the act of giving up your ability to question something, and it’s a very powerful tool (for both good and evil). If your opposite in a debate will not question their position, there is no hope of finding a middle ground.

And so the human reaction of rational thinkers is to fight fire with fire; to entrench our positions; to have Faith in the non-existence of God(s). And the battle has been joined. Some of the most brilliant and rational minds in the world have begun a counter offensive to light a fire under the secular community.

Their position is based upon the same logic I based my own atheism on:

Therefore God does not exist.

I pointed out last week that there is evidence that belief in God confers an evolutionary advantage. So what? If we do indeed have an evolutionary advantage to believing in God, it does NOT imply that God exists. (This is a classic logic error: “All pregnant people are female” does not imply “All females are pregnant” despite the wishes of some Japanese politicians).

But an equally grievous logic error is to presume that because the 3 axioms above are true, that it implies the existence of God is “crazy talk”.

The Poetry of Donald Rumsfeld

Let’s examine the first axiom: There has been a relentless increase in the things we’ve proven about the universe.

This is undeniably true. However, the view that I presented in The Shiny Ball of Atheism is misleading. To refresh your memory:

This implies that mankind should have hope that one day we will vanquish the unknown, and from there we derive the creed of the atheist Faith: God will no longer have a place to hide from the cleansing light of rational analysis.

The reality is somewhat different. Each discovery we make, each breakthrough we achieve, brings up new questions that we didn’t even know to ask before the breakthrough.

When cavemen discovered how to light fire on their own did know to question how is flame affected by gravity. They didn’t even know it was possible to be in zero-gravity. Flame in zero-gravity was, to quote Donald Rumsfeld, an “unknown unknown“. When Copernicus published his treatise showing the earth moved around the sun, he didn’t know to ask are collections of stars (galaxies) always centered on black holes. Ernest Rutherford, when proving the concept of a nucleus in an atom (a relatively new concept), had no concept that the atom was way more complicated that neutrons, protons and electrons. But we’ve now learned to seek the answers to these new questions because as we answer more questions we uncover more questions to answer.

A better view of the “relentless increase in the things we’ve proven about the universe” is: 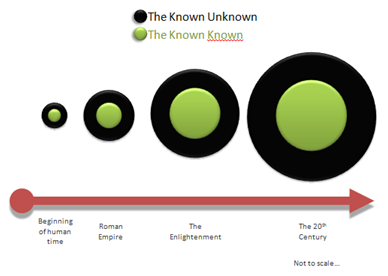 We are increasing the amount of the “Known Knows”, but each time the amount of the “Known Unknowns” increase with it. Answers beget more questions. And we have no idea of the size of the “Unknown unknowns”. The idea that the “relentless increase in the things we’ve proven about the universe” will remove areas for God to hide from the cleansing light of rational analysis is wrong.

Let’s examine the second axiom: During thousands of experiments, we have found no evidence that proves the existence of God.

This is true. Now, let’s refresh our understanding of probability from The Shiny Ball of Atheism:

First, like Gravitational Time Dilation, proving the existence of God among the Known may require tools or mechanisms of measurement not yet invented. Yes, based on current knowledge this is Highly Unlikely, but the counter argument is that to Galileo, it was highly unlikely that clocks on airplanes would have to adjust for the effects of gravity on time – yet they do.

But secondly, even if the tools for measuring God never emerge, if one believes that the concept of God may reside in the “Unknown”, current science, specifically Quantum Mechanics, suggests it is impossible to fully known everything. That is, we can never eliminate the “Unknown.” For this we can thank the German scientist Werner Heisenberg.

In the earliest Twentieth Century, Heisenberg theorized that, even if you can eliminate the tendency of an observer to change a measurement just by observing, it is impossible to measure anything to 100% accuracy. You can get very very very close (specifically, you can get to approximately (1 – (6.626*10-34)/2)*100 percent accuracy), but you can never be 100% accurate.

This theory is non-obvious, and even Einstein railed against it during his life, but it does allow us to successfully make predictions about systems (one of the key tenets of a successful scientific theory). The Uncertainty Principle, like the theory of Gravity and of Evolution, has been shown experimentally to be “Highly Likely” to be true.

And it has a staggering consequence. If the Uncertainty Principle holds true it is impossible to ever prove the non-existence of God. Religious fundamentalists can take the tools of rational debate, and just argue that the concept of God resides within the uncertainty, and while we can argue its improbability, we must concede its possibility. Put another way:

And finally the last axiom: The culture of science, correctly, puts huge value on skepticism.

Again, this is true. And the Fundamentalist Atheist maintains that this skepticism is one of the foundations of rejecting the existence of God.

But to maintain a firm stance in Atheism (which is the unquestioning belief in the non-existence of God) fundamentally violates this rule. It is not a culture of skepticism; it’s a culture of Faith. When you look at the evidence with a skeptical eye you see:

Therefore a rational thinker should conclude that it is unlikely that Religious fundamentalists have a leg to stand on, but it is equally unproven that unquestioning Atheism has a leg to stand on.

Where does that leave the rational skeptic? I believe it leaves him or her on the Pragmatic Path of Agnosticism.

(which I’ll continue next week…)

Help me raise over $10,000 to help people suffering from cancer

(1) For this article I’m going to use the term God to mean either “the existence of a God or Gods, or the reality of Spirituality”; please don’t take it as an endorsement of any particular instantiation of Spirituality, just as way of avoiding typing long phrases over and over.

11 thoughts on “The Fundamentalist Atheist”

This site uses Akismet to reduce spam. Learn how your comment data is processed.